Why brands should pay attention to their social media accounts. 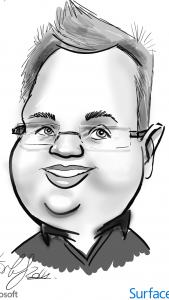 Before I explain why brands should pay attention to what is happening on their social media accounts, let me start with an example coming from my own experience.

I am an Apple user since 2007 when I bought my first MacBookPro after smashing my ASUS windows laptop against a wall out of frustration after it crashed once again! My current laptop is a 2011 MacBook Pro, it is getting a bit old and I feel it is time to change, although it has been upgraded with a SSD, it is now clear that the CPU is a bit too old and it is heating very quickly!

Last November, I was in Dublin for the WebSummit and I visited the Microfost Surface Booth. The Microsoft staff was showing the visitors how cool the new Surface Pro 3 is and we were allowed to give it a 5-10 minutes try. Then a cartoon artist, Steve Mulreany, drew a caricature of me on the SurfacePro 3 with a really nice result (see picture). Microsoft has been working well to present the product in Dublin and I must say that my overall impression was very good. In fact it was even so good that I tweeted back then that the Surface Pro 3 would replace my MacBook Pro:

The #SurfacePro3 is surely going to replace my MacBookPro! I want one!#SurfaceWebSummit pic.twitter.com/34a2eZHMCp

The #SurfacePro3 is surely going to replace my MacBookPro! I want one!

and I tweeted this too:

Whoever said there was no wow effect with #microsoft products was wrong! Just tested the #SurfacePro3: I now want one! #SurfaceWebSummit

Whoever said there was no wow effect with #microsoft products was wrong! Just tested the #SurfacePro3: I now want one!

As you can see I was quite enthusiast about the SurfacePro 3, but I wasn’t about to buy a new laptop right then. A few months later, I am ready to buy myself a new laptop and the first thing I remember is how impressed I was by the SurfacePro 3 in Dublin, so it is my number one candidate.

I have been thinking about this for a few weeks and there is one thing that annoys me about the SurfacePro3: the keyboard. You just cannot use the SurfacePro3 as a laptop on your knees, you need to put it on a table. In my case, as I am using my laptop more and more often in a train (to write this blog), I cannot always use a table, which would mean no keyboard. I am not so sure anymore that the SurfacePro3 will suit my needs. So last week I decided to ask Microsoft BeLux if it would be possible to test a SurfacePro3 before I buy one. I asked them on twitter:

@Microsoftbe, before I buy a @surface pro3 to replace my MacBookPro I'd like to test it for a week. Is it possible to arrange that?

@Microsoftbe, before I buy a @surface pro3 to replace my MacBookPro I’d like to test it for a week. Is it possible to arrange that?

Notice that I start my tweet by @Microsoftbe so the tweet is seen only them, me and the people following both of us and @surface which is also in my tweet. So this tweet isn’t supposed to been seen by a lot a people.

It seems that nobody at @Microsoftbe had seen or wanted to answer to that tweet. 24 hours later I tweeted this:

Hey @Microsoftbe @surface, any thoughts on my previous tweet? Or should I just go buy myself a new MacBook Air?

Hey @Microsoftbe @surface, any thoughts on my previous tweet? Or should I just go buy myself a new MacBook Air?

Considering the advertising campaign of Microsoft comparing the SurfacePro3 and the MacBook Air, if I was the community manager of Microsoft BeLux, I would have reacted here! I was pretty sure, this tweet would trigger a reaction, but it didn’t!

Still no answer, so after the weekend (as I am not expecting their community manager to work during the weekend or out of working hours), I tweeted this:

Hey @Microsoftbe @surface, still no answer after 1 week? I'm not impressed by the way you handle social media discussions

Hey @Microsoftbe @surface, still no answer after 1 week? I’m not impressed by the way you handle social media discussions

Ok, I admit, it isn’t really 1 week, only the 3rd working day (calendar days). I have had a look on the @Microsoftbe account, they have been promoting products, giving advice, but not answering to tweets. It is obvious that they don’t care about what can be written about them on twitter.

And so now, in just a few days, I am seriously doubting that I want to buy some hardware from a company who doesn’t answer simple questions like that on twitter. If Microsoft BeLux had answered (even in a negative manner, saying they cannot help me), I would have felt that I could trust the company to answer me in case of problems if I bought the SurfacePro3. Now my impression is that if I buy their hardware and I have an issue, there will be no one on the other side of the line to help me.

Of course I could have asked by mail or by phone, but what are social media accounts for if not for discussion.

My conclusion is that Microsoft BeLux handled this request is a very bad way. Not answering is the worst of ways to handle this kind of situation.

So now, here is my piece of advice:

Why brands should pay attention to their social media accounts.

As a brand you should pay attention to your social network accounts at least for the following 10 reasons:

Not answering to people on social networks is like opening a store in which you completely ignore peoples questions, or by answering to all the questions about your products with a single answer, the price.

Imagine the effect that this kind of behavior this would have on your potential customers, do you think that would make them like your brand?

If you are not ready to answer to people quickly on social media, then just don’t open an account! Companies like Nestlé have learned this in the hard way, remember the Greenpeace campaign on KitKat and the way is was ignored by Nestlé until it became really bad. Nestlé now is paying a lot of attention to social media and not only to avoid a bad buzz, they seem to have understood the lesson and what social media is all about!

As a conclusion, I would insist on the following:

Your brand should act on the social networks as it would in real life interaction.

You should consider your social accounts just as stores your brand has opened in major cities: the same level of customer satisfaction should be the goal of your Community Management team.